Still chat with your friends with still meme pictures or mute meme GIFs? It’s time to make a change because now it’s the age of video memes.

As opposed to traditional meme pictures and meme GIFs, the video memes are easier to be made and are more vivid and colorful with audio and richer colors per pixel. Besides, a video meme is the only way that can be shared on Instagram and YouTube.

In this post, we will introduce you to the 6 best online video meme makers. So, you can easily use your videos and their video meme templates to create hilarious video memes for sharing. Preview
I Am Fine Meme
Use This Template You can browse through FlexClip’s funny video meme templates and kickstart your video meme creation in no time. Upload your videos, photos to FlexClip or use its millions of high-res stock videos and royalty-free music and text animations and dynamic elements to spice up your video meme.

Upload your videos to FlexClip or go to the “Video” tab on the left sidebar > enter keywords like “cat”, “laughing”, “reaction” to select a funny video for your video meme > drag this video from the media library to replace the premade video. You may trim its duration as well.

Replace the pre-made meme video with a new one

There are many fonts for your video meme. You can customize its size, color scheme, alignment, styles, and motion. For subscribed users, you can even upload your favorite meme fonts like Impact, Comic Sans, or Helvetica for the meme caption.

Customize the font, style, and animation of the video meme

You can take your video meme up a notch by adding BGM or sound effects. Just go to the “Music” tab, where you can access thousands of royalty-free music and SFX. In the “Elements” tab, funny emojis, colorful shapes, social icons, etc. will make your creative juices flow.

Add sound effects or dynamic elements to your video meme

Create Now
Bonus Tips: How to Create the Looping Effect for a Video Meme
Once you are done with one storyboard, simply copy and paste it to a couple of other storyboards. Then, as you play the video meme, you shall have the looping effect. If you post it on Instagram, you don’t have to copy the same video since an MP4 video meme on Instagram will automatically have the looping effect.

Create the looping effect for a video meme

FlexClip also supports direct sharing of your video meme project to YouTube or Dropbox for storage.

Once you select an ideal video meme template, you can immediately make video meme editing. The timeline mode allows you to enjoy smooth editing. Two things worth mentioning are that there are many meme fonts available within the meme editor and the premade video also has a looping effect, which is pretty useful.

Another great feature is you can a URL from YouTube and you can instantly edit that YouTube video to make a video meme. Truly amazing. But, you need to be careful with the copyright infringement issues.

Canva is one of the leading graphic platforms in the world. If you have used its free service to create YouTube thumbnail pictures or business flyers, you should also use Canva’s video meme maker for making a funny video meme.

You may create your video meme from scratch or use its ready-made free video meme templates to turn your funny life moments into a hilarious video meme to poke fun at friends.

Customize your fonts, add funny emojis, change color styles, everything comes easy. Canva also has GIPHY integrated within its editor. So, it all depends on your needs. You may add music to your video meme. However, audio assets are mostly for paid use and most of the video meme templates are also not free for download.

Clipchamp video meme maker is now officially a product of Microsoft. Although barely currently offering only 5 video meme templates for you to select from, Clipchamp offers you a hassle-free meme editing experience.

The video meme template you use already has the looping effect while the top and bottom texts also stand ready for you to customize. For its premium users, you may upload your own font to be added to the video meme.

Like Canva, most of the audio and video stocks are only available to paid subscribers. One of the outstanding features of Clipchamp is its speech-to-text feature. You can enter texts and select from dozens of foreign languages and accents to convert them to a high-quality human voice. Truly impressive.

For free users, you can export your video meme in MP4 (480P) and easily share it to multiple social media.

Veed is an easy-to-use online video meme maker that allows you to make decent video memes in a breeze. Though Veed doesn’t offer you a video meme template to begin with meme-making, it offers 4 ways to import your videos to its meme editor, i.e. from direct upload from PC, screen/ webcam recording, and Dropbox and even by pasting your YouTube link. 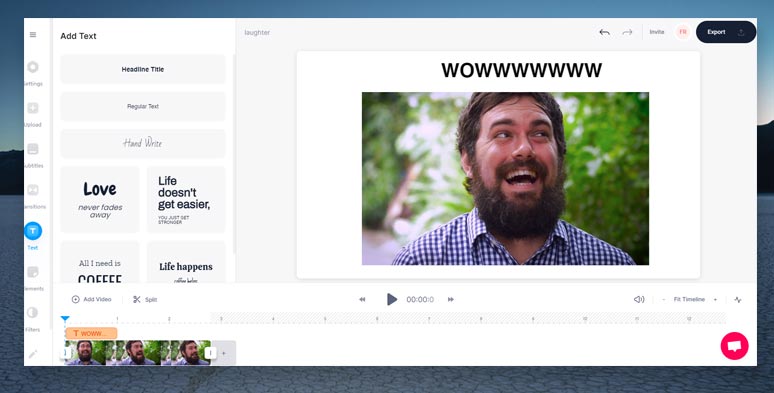 After you upload your clips to Veed, you can adjust their size, add captions, emojis, audio, or change background color to make a video meme. To create the looping effect you have to manually copy multiple clips. For free users, there will be a watermark in the top left corner.

Filmora online video meme maker is one of the newest video editing tools offered by renowned Wondershare corporation. It is super easy to use with a minimal interface. All you need to do is drag and drop your video into the video meme maker.

Then, your video will be imported to a ready-made video meme template, where top text and bottom text are ready for you to customize. You may also add text inside the video and change its fonts, color of the fonts and background, text alignment. And finally, export your video meme as an MP4.

Overall, the Filmora video meme maker is a great tool for noobs with basic tools.

Though some of the online video meme makers share similar features, none is truly built equal. The best video maker is the one that meets your needs best with minimal cost. Do play with them to find your ideal video meme maker. So, start creating your first video meme from FlexClip now!