Free Make, Troubleshoot Twitter Video, And Analyze Those Most Retweeted

It's worthy to note that Twitter videos play a big part in influencing us. In the case study, those Twitter posts with a quality video or cool photography are more likely to win retweets:

Twitter videos are perfect media to enrich your contents, catch viewers eyes, and most importantly, distinguish your tweets from millions of plain text tweets.

Part 1: How to Create An Effective Twitter Video Free Online?

In order to create an effective Twitter video, you must prepare 3 things:

Twitter video creation can be easier and a lot of fun, if you grab FlexClip video editor as your free video maker. 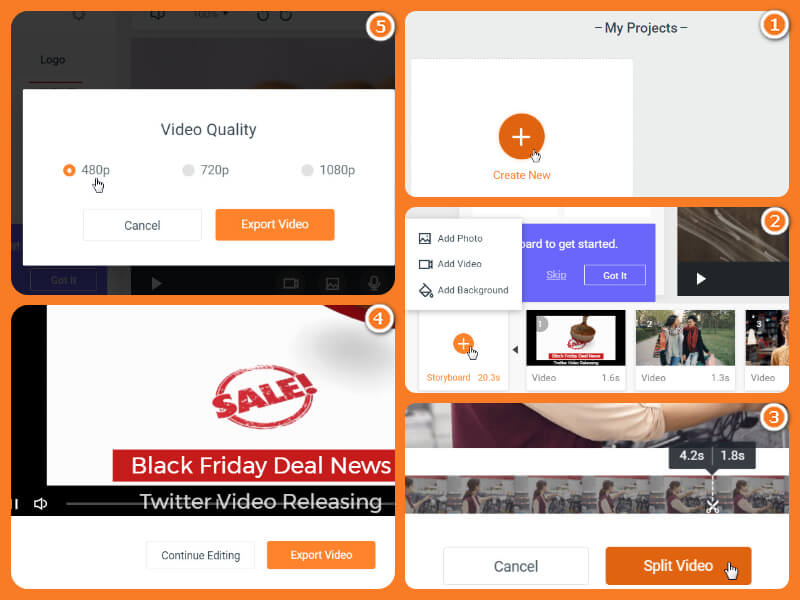 Image board: How to make your free Twitter video in FlexClip?

Step 1 Register a free account, and create a new project.

Step 2 Create a video storyboard, select your Twitter video, and define which video part to be included in the storyboard. (If you want to upload more video contents, you can repeat this step of adding storyboard).

Step 3 Split your Twitter video into small ones, and add short lines (words) to each.

Tip 1 If you lack fantastic video footage, you can use FlexClip video search function and find many a good-looking storytelling video to include in your Twitter video.

Some may see some annoying errors when uploading a video to Twitter. Below, we compile those most common questions and answers for your troubleshooting:

Part 3: The Analysis of Hot Twitter Videos That Bring The Most Retweets

By analyzing the most-retweeted Twitter videos, we find these hot twitter videos can be classified into 7 categories:

Substantial cash giveaway tweets or awesome gift messages will go viral fast on the Internet. Audiences and readers love to see such gift news. They hope to spread the news and win attractive cash/gift. Even if, unfortunately, many of them miss to hit the list of winners, people are still curious about who are lucky winners.

If you see such attractive gift/cash-giving news, make a Twitter video about how to participate in the campaign and tweet it, then you have a bigger chance to win free Twitter followers.

Celebrity videos and photos are followed and wanted by billions of fans. The tweets from One direction member hit the World-Top 10 retweets several times.

If you are an affiliate of a brand that's endorsed by a celebrity, tweeting celebrity endorsement video is a great idea to promote your affiliate business.

Top 3. Most Retweeted Twitter Videos - Call for Help, Against Bully and Evil:

Those videos recording bully and evil acts are the most hatred. If you find such acts or such footages, stand out and make a Twitter video to call for peace and caring. People will love to help you and support you by retweeting your Twitter video.

Cats, dogs, birds, and other animals are like adorable babies to human, and their topics always hit Top Retweet list. People just love to watch animals and care for them.

Tweet a Twitter video shooting animal lifestyle or calling for love, then you'll have a good chance.

Singing videos are sharing the happiest moments in daily life. There are over 17,000 original singing video tweets go rival in a year.

Therefore, if you can sing well or one of your friends is a potential singer, don't waste the talent and create a singing Twitter video. You may have a chance to win tons of free Twitter followers, and perhaps get famous.

Gaming is always the 21st-century topic: Gaming videos can fast spread among gamers and friends. Top player video and top game match can easily get 200,000+ retweets.

If you find previous ideas not easy to create a Twitter video, then food and recipe videos are definitely a feasible way.

If you cook well, then make a recipe food video and tweet it. Or else, you can shoot a dining video, sharing delicious food via a Twitter video.

Do you find this article about Twitter video helpful?